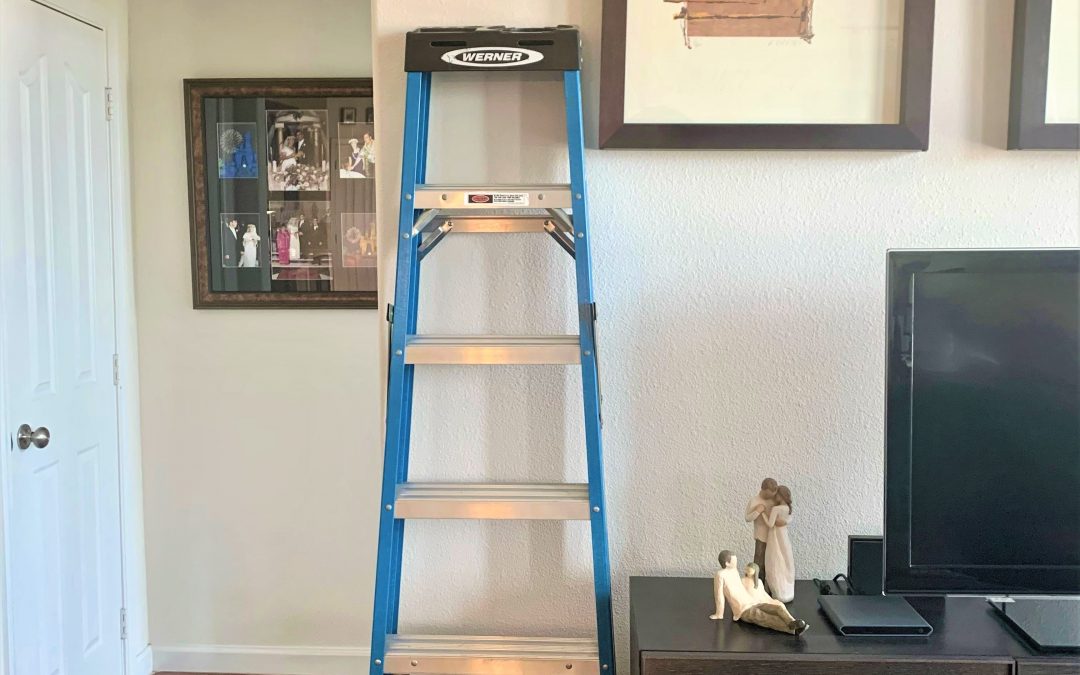 See the ladder in the picture? During the early morning hours, the CO2 alarm started chirping. My husband went to get a ladder to fix the issue. Then it was almost noon, and the ladder was still there. It was out of the way but still, that ladder was in my face.

I was trying to work near that space, but that ladder made itself known, telling me it was out of place and in my face. I could not focus nor ignore that fact. It truly made me uncomfortable. This incident made me think a little about how clutter happens and why it creeps quickly in many homes.

It Seems Trivial, But Is It?

That ladder is precisely the kind of thing that no one would pay attention to because it seems trivial or inconsequential. But ignoring the ladder for a couple of days would result in everyone getting used to it being there. After a few days, we no longer see the ladder. And weeks pass, months pass, and next year, the ladder is still there!

This phenomenon happens with the ladder, with every tool we own, packaging from store-bought items brought into the home, cleaning products, and even kitchen gadgets.

If we do not remain vigilant to these instances and miss the signs, clutter will likely follow. We stop seeing things when we ignore them.

What Is Your “Un-comfort” Zone?

The question is, how likely are you to take notice, and how tolerant would you be of items out of place? At what point do you start feeling uncomfortable?

Some people might not even have proper space in their kitchens to cook and not be bothered. Feeling uncomfortable with the situation is a very personal threshold. But if we end up confused by the clutter or need help dealing with the mess around us, that probably means that stuff has overpowered us. We missed the early signals.

The mere idea of putting the ladder against the wall for even a minute after using it bothers me. But that is how I am sure clutter does not happen in our home – because my tolerance level is zero! My zero-tolerance ensures that I do not miss the early signs of chaos.

“For The Moment” = Creeping Clutter

It is unnecessary to be so drastic to be and remain organized, though. What is needed is to recalibrate the point where we start feeling uneasy, so we get the cue that it is time to act instead of ignoring the clutter. That is how we avoid mess from taking over our lives.

While it might seem normal to use a tool and leave it anywhere “for the moment” to “put it away later,” this puts us at greater risk of creeping clutter. How likely are we to place the item in its place at a later time? Not very.


Deprecated: Directive 'allow_url_include' is deprecated in Unknown on line 0